Erzbergrodeo Beckons For WESS Round Three 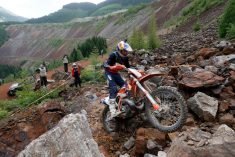 Wels, Austria – 29 May, 2019 — The World Enduro Super Series marches on to Austria this weekend and the world-renowned Erzbergrodeo.
More than 1,700 Enduro competitors and thousands more fans will converge on the mining town of Eisenerz for the legendary, annual dirt bike festival. This year will mark the 25th edition of the infamous race with organisers promising to pull out all the stops to ensure it will be one to remember.

Garcia Holds WESS Points Lead
At the top of the World Enduro Super Series standings, Red Bull KTM Factory Racing’s Josep Garcia (ESP) will arrive in Austria as the early championship leader following his victory at round two in France. In what will mark only his second time competing at the Iron Giant, Garcia will look to build on his 17th place result from 2018 and crucially keep his series lead intact.

As the 2018 winner of the Erzbergrodeo Red Bull Hare Scramble, Rockstar Energy Husqvarna Factory Racing’s Graham Jarvis has his sights firmly fixed on claiming his fifth victory. The 44-year-old British rider secured a dramatic come-from-behind win 12 months ago, only taking control of the race lead with three checkpoints to go.

In what was one of the closest finishes in recent times, Jonny Walker (KTM – GB) followed him home for the runner-up result – finishing just 41 seconds behind. Already a three-time winner of the race, Walker – currently third overall in WESS – knows a victory on one of Enduro’s biggest stages would propel him to the top of the championship.

Young Guns Hungry To Win
Both respectively chasing debut wins at the Iron Giant, Manuel Lettenbichler (KTM – GB) and Billy Bolt (Husqvarna – GB) were the standout performers in 2018. The pair set the pace during the early stages of the race and looked on course to fight for the win until Jarvis caught them in the closing sections. Learning from their mistakes, they are ready to try again. A win by Lettenbichler would see him become the youngest winner in the 25-year history of Erzbergrodeo.

Winner at round one’s Toyota Porto Extreme XL Lagares, Sherco Factory Racing’s Mario Roman, arrives in Eisenerz off the back of his greatest career win. Riding high on confidence, the Spaniard is keen to put to rest his Erzbergrodeo demons – 2019 could be his year. Eager to have his say in that is teammate Wade Young. The South African was runner-up to Roman at round one and is determined to finally add one of Enduro’s most-prestigious races to his CV.

With five Erzbergrodeo Red Bull Hare Scramble wins already to his name, Taddy Blazusiak (KTM – POL) is synonymous with the race and rightly stakes his place in the event’s 25-year history as the most decorated rider. Although last a winner in 2011, he’s never one to be counted out.

Forced to miss racing in 2018 due to injury, 2017 winner Alfredo Gomez (Husqvarna – ESP), returns to Austria with redemption on his mind. With the disappointment of being unable to defend his #1 plate in 2018 still very raw, the Spaniard will come out all guns blazing.

Webb Aiming For First American Win
Cody Webb (KTM – USA) adds to a long list of competitors capable of victory this weekend. Webb has twice finished on the podium in 2016 and 2017, only to see a crash during qualification rule him out in 2018. With potential to become the first American to win the Erzbergrodeo Red Bull Hare Scramble, Webb could add to the enormity of the 25th edition if he reaches the finish line first.

Laia Sanz Makes Erzbergrodeo Debut
Making her long awaited Erzbergrodeo debut, Spain’s Laia Sanz is aiming to become the first woman to complete the race. As a 13-time Trials World Champion, five-time Enduro World Champion and top-10 Dakar finisher, Sanz has a wealth of experience and skill to use when the going gets tough at the Iron Giant. Determined to succeed in anything she puts her mind too, Sanz could make history, live on Red Bull TV, on Sunday afternoon.

Four Days Of Enduro Action Await
Staged across four days, the action opens with Thursday’s Mitas Rocket Ride. A hill climb like no other, competitors go head-to-head as they bid to conquer one of the Iron Giant’s steepest quarry climbs. Friday and Saturday are all about the Blakläder Iron Road Prologue where riders aim to qualify for Sunday’s main event. Against the clock, competitors compete in a time trial race as they blast their way up the maze of gravel-based quarry roads hoping to become one of the fastest 500 riders who will start the Erzbergrodeo Red Bull Hare Scramble.

Sunday is all about the serious business of racing. Faced with the world’s toughest Enduro course, the 500 qualified competitors have four hours to complete the 27 checkpoints strategically placed around the Iron Giant. Played out live on Red Bull TV, they will battle their way through near-vertical climbs and descents, cross boulder gardens and treacherous forestry roots and rocks. It’s a race where only the strongest survive and the greats of Enduro have etched their name onto the winner’s list.