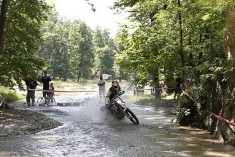 It’s been four years since the Maxxis FIM World Enduro Championship last ventured to Serres, in the Macedonia region of Greece. We felt it was time to go back to this great town!
The organisation behind this fourth round of the championship already has six Grand Prix worth of experience (2004, 2005, 2007, 2009, 2010, 2015), as well as putting on the 2008 ISDE, and the LAMS club were quick to step up to ABC Communication’s request to replace the Grand Prix of Corsica – which was originally planned for the same dates! Directed by Aris LIOUGAS and Christos POUFTAS, this motorcycle club is very well-known in the World Enduro paddock, as well as in the wider motorsport field since they have organised many rally and circuit races!

A Utopia for World Enduro!
Sokrates KIOSSES, a member of LAMS motoclub and a familiar face in EnduroGP as one of the most efficient timekeepers in the Championship, told us in Portugal: “The paddock will be located at the circuit of Serres! The riders, the teams, the press, and the FIM will have everything on site and should enjoy themselves in this paddock! For the special tests; Friday night’s Akrapovic Super Test and the Maxxis Cross Test will also be at the circuit, while the Technomousse Xtreme Test will be located in ‘Rachovitsa’, and the Champion Lubricants Enduro Test is in ‘St Georges’!”

Serres is a Greek city in the region of Central Macedonia, boasting more than 80,000 inhabitants. It has a great history, which can be seen in the Basilica of Saint Theodore and the monastery of St. John the Baptist, located a dozen kilometres from the city. Serres, located 77 kilometres north-east of Thessaloniki, is a city that greatly appreciates motorsports and especially Enduro… there’s sure to be a wonderful welcome in Greece this weekend!

Will HOLCOMBE Be Ready?
Suffering with a viral infection during the Iberian tour in Portugal and Spain, Steve HOLCOMBE (GB – Beta) was forced to concede class leadership to Brad FREEMAN (GB – Beta Boano), who was in great shape and full of confidence!
The Beta Factory rider will arrive in Serres with the hope of hunting down his compatriot, something he managed excellently last season when he was chasing Alex SALVINI (I – Honda). But it will all depend on his physical condition, is he back to 100% now? His health will, naturally, play a crucial role in his fight with FREEMAN.
On his side, the Beta Boano rider will aim to manage his lead and counter the attacks of his rivals, a position he has seldom been in since his debut in the World Championship…
FREEMAN needs to focus not only on HOLCOMBE, but also Danny MCCANNEY (GB – TM), as evidenced on Day 2 in Spain where he had to work hard to prevent the Manxman from taking his first EGP victory.
In addition to MCCANNEY, Alex SALVINI (I – Honda), Loïc LARRIEU (F – TM) and Giacomo REDONDI (I – Husqvarna) also have the weapons to fight for the podium or the victory.
Keep an eye on the other keen and quick riders in the field such as Christophe CHARLIER (F – Honda), Matteo CAVALLO (I – Sherco), Davide GUARNERI (I – Honda) and Thomas OLDRATI (I – Honda), who are all close to the level of the best.
Finally, we hope that Eero REMES (SF – Yamaha) will have recovered from the physical problems he was suffering, and will be ready to fight at the front again.

This fourth round should also be worth its weight in gold in the E2 class. While Alex SALVINI is currently in the lead, the recent victory of Giacomo REDONDI shows that the class is still open and highly competitive. In addition to the two Italians, Loïc LARRIEU and Eero REMES have also been on the highest step of the podium…
Without forgetting Christophe CHARLIER, currently 2nd in the provisional standings, and very keen to get his first victory with Honda! There will be a minimum of five riders aiming for victory in Serres in E2, and it is likely that the standings will change completely by the end of the weekend.
Look out for Benjamin HERRERA (CL – Beta), consistent since the beginning of the season and ready to keep his place in the Top 5. Quick class rookies Joe WOOTTON (GB – Husqvarna), Hugo BLANJOUE (F – KTM) and Davide SORECA (I – Honda) would all love to close down their experienced rivals. And Edward HÜBNER (D – KTM) has also been putting in the effort to run at every race this year.

In the E1 class, who will be able to stop Brad FREEMAN? The happy-go-lucky Brit has so far been undefeated in his class since the beginning of the season, and it is seeming increasingly difficult to stop his winning streak…
However, there are some very strong contenders in Davide GUARNERI, Matteo CAVALLO and Thomas OLDRATI.
Without forgetting Kirian MIRABET (E – Honda), who performed well during the Iberian tour, as well as Rudy MORONI (I – KTM) and Patrik MARKVART (CZ – KTM) who will fight it out for a place in the Top 5!

Over in E3, Steve HOLCOMBE saw Danny MCCANNEY steal the show in Spain. Although he is still 12 points ahead of the factory TM rider, he will need to be ready to hold on tight to his lead; MCCANNEY has looked extremely confident since the beginning of the season.
Behind the British duo, David ABGRALL (F – Beta) and Anthony GESLIN (F – Beta) will likely continue their duel for the last step on the podium, while Simone TRAPLETTI (I – Gas Gas) will seek to get closer to a first career podium. Meanwhile, passionate local rider Vasilios SIAFARIKAS (GR – Honda) will come face to face with the cream of the Enduro crop, as he has done as a wildcard entry in every Grand Prix of Greece.

The Road to the Title for VERONA?
In the Overall Junior class, the Championship situation is very much: advantage Andrea VERONA (I – TM). During the Iberian tour, with the woes of Wil RUPRECHT (AUS – Yamaha), the Italian pulled out a 35-point gap on his nearest rival, who is now Enric FRANCISCO (E – KTM).
This Maxxis GP of Greece could be a vital turning point for the 2019 season if the likes of FRANCISCO, RUPRECHT, ESPINASSE (F – Sherco) and EDMONDSON (GB – Sherco) manage to topple the TM rider.
On the other hand, we expect to see the 2018 125cc World Youth Champion, Ruy BARBOSA (CL – Husqvarna) improving with every round. Thomas DUBOST (F – KTM), Emanuele FACCHETTI (I – Gas Gas) and Antoine MAGAIN (B – KTM) all have good pace too.

Naturally, it’s the same story in Junior 1 with impressive Andrea VERONA heading for his second E1 cup in as many years if RUPRECHT and ESPINASSE are unable to up their game. In J2, the duo of FRANCISCO – EDMONDSON put on a great battle every weekend, but they’ll have to watch out for BARBOSA, FACCHETTI or DE CLERCQ (F – Husqvarna).

This Grand Prix Maxxis of Greece is highly anticipated after four years of waiting in Serres. No doubt that thousands of Greek fans will gather on the various tests to encourage the elite of World Enduro. We’re sure LAMS will have put together all the elements to make this 4th round of the season a big festival in a city that particularly appreciates motorsports …
Practical Info: