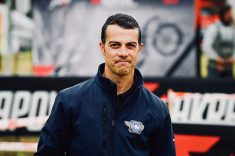 “I believe that an Enduro competition is one of the most complicated events to organise.”
Maurizio Micheluz is a rider, but, since 2015, he is also FIM’s Race Inspector for the Enduro competitions. He tells us how it is not at all easy to put together around 60 kilometres of off-road, and plan special tests, all of which requires necessary authorisations to make the events happen.
“Not to mention ISDE, when the kilometres are roughly doubled for three different racecourses.”

Maurizio is part of the Race Commission, which also includes Pedro Mariano, FIM’s Race Director, and the national Race Director.
He is in charge of all the different racetracks of the World Championships’ stages. Although this might seem trivial, it really isn’t.
Already months before an event, Maurizio, representing the International Federation, starts working with the local organisations on setting up the racetrack right up to the days of the competition. Hammer and tape in hand, he also plans and constructs the special tests.

“Team work is very important at FIM and we try to involve all the players: riders, motor clubs and volunteers. The greatest amount of energy usually is invested in the special tests, because these are the parts of the track where the competitions are decided.” He continues: “My experience as a rider helps me a lot in taking care of three different aspects which tend to contradict each other.”

In fact, an Enduro race is pure adrenaline, even if it’s a regularity contest, it takes place over more than 200 kilometres, and it forces the riders to stay in the saddle for more than six hours. It combines the technical factor, which is derived from the challenges riders, and motorbikes, have to face along the racetrack, with the resulting spectacle.
It is a real show.
These different factors are just as important to FIM as safety. Maurizio tells us that also here his own experience as rider is advantageous in weighing up, and understanding, immediately just how far he can go in designing the racecourse to guarantee a high technical level, a unique show, as well as the necessary safety for the riders.

“I think it’s fundamental that a former rider with lots of experience does my job. The fact that I am still active also helps me to keep that rider’s perspective, to appreciate the speed and technique necessary in order to understand the level of a competition and make sure it’s appropriate for a World Championship.”

You can tell that Maurizio really adores this sport and that he is a rider himself: of course safety is the priority, but actually defining the different characteristics of each racetrack is crucial. He does not aim at an ideal circuit, but, rather, he believes that it is better to appreciate and promote the particularities of every single competition.

“The ideal racecourse does not exist. Every country has its own features, and they are unique in their own right. I would say that a good racetrack needs to be mainly off-road, flowing, and with some technical passages. However, it also depends on individual taste. The beauty of this, and the essence of Enduro, is to face unknown and ever-changing challenges.”

Riders need to be resistant and fast, and the same thing is requested from the bikes, which, in recent years, have seen, and continue seeing, an incredible evolution.
It might seem a small detail but undoubtedly the bikes’ performances are closely linked to how a racetrack is laid out. They are not only extremely resistant, but, nowadays, they also reach performance levels which absolutely have to be considered.

“Today’s bikes are so fast that sometimes it’s not the rider driving the bike, but the bike driving the rider. I emphasise this again and again. Sometimes this is hotly debated with the organisers, but it’s exactly because of this that I have to intervene and potentially modify the special tests.”

He is a rider and he speaks their language. The Race Commission responds, decides, and is responsible for the competitions, but this does not mean that there isn’t a constructive exchange with the riders.
It is important to listen to everyone and often this feedback is very useful: a rider is very critical, and maybe it’s exactly for this reason that Maurizio developed his particular attention to detail. When he has something to say, he says it. At the same time, everyone knows that the essence of Enduro is its changeability: if you don’t approach this discipline with the idea that sooner or later the riders have to adapt themselves to their environment, you have chosen the wrong sport.
Errors can happen at all times, and the conditions can change from one moment to the next. The riders know this and accept it.

“Sometimes it has happened that I was wrong, but they understood me anyway. Often we have to take decisions instantly, especially, for example, when it starts raining and I don’t always manage to do everything that should be done.”

EnduroGP is fascinating because pros compete with amateurs in exactly the same context. At the same time, however, the racetracks are created with the top riders in mind.

The Open category might have shorter, and in some ways softer, courses, but what makes it so intriguing is the fact that the main idea is the same for every single competition in the calendar: whoever wants to race, has to face a track worthy of a World Championship.

It is right to think about everything else that Enduro is also outside of the professional context. Maurizio believes that to this end the EnduroGP events can also function as a way to promote the discipline as a whole.

“The competitions can help to portray motorbikes as something ‘orderly’ and respectful. A lot of people consider them dirty, loud, and harmful to the environment. In our competitions, all of these aspects are taken care of and more balanced. Therefore, I think that the events can help to show that we are well-mannered and respectful.”

Competitions can go hand in hand with non-agonistic riding. As a fan, not only as a rider, he believes that, apart from communicating the discipline, it is right to work on how it is best practiced.

“The rules of Enduro is a very vast topic of conversation. Every country has its own regulations, and these can even change from region to region.
In many countries Enduro is practically illegal except for authorised events. I believe that having more open trails and something like Special Tests for amateurs can only be beneficial.”

His attention then returns to the Championship and its calendar.
He has already been to the Czech Republic to check the track and reveals that, “it will be a classic competition on dark earth, roots, and some rocky passages. There will also be some muddy sections so weather can play a decisive role. Yet again, weather might change everything: the CzechGP is famous for being extremely difficult when it rains.”
He will also travel to France soon, so he will be able to tell us about that competition which already promises to be magnificent.

Maurizio Micheluz is an Enduro rider, whose contribution for FIM, and the respective Enduro Commissions presided over by John Collins, renders the EnduroGP competitions technical and spectacular.

And, above all, safe.