Close Battles And Unprecedented Growth For WESS In 2019 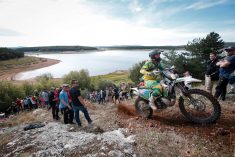 Wels, Austria – 23 July, 2019 — The World Enduro Super Series has enjoyed an incredible start to the season with multiple different winners and championship leaders, plus unprecedented media growth. From the season opener in Portugal, the racing has been nothing short of epic as the race to become this year’s ULTIMATE ENDURO CHAMPION has moved through France, Austria and most recently Spain.

Now, with four rounds complete, it’s time to take a look at some of the season highlights to date before gearing up for what’s set to an action-packed second half of the championship…

It’s A Close Championship Fight
The race to become this year’s ULTIMATE ENDURO CHAMPION is incredibly tight. From four races we’ve witnessed four different riders grace the top of the championship standings. Sherco Factory Racing’s Mario Roman (ESP) was first to lead with victory at round one. But seven days later, Red Bull KTM Factory Racing’s Josep Garcia (ESP) stormed ahead with a winning ride at Trèfle Lozérien AMV. At Erzbergrodeo Red Bull Hare Scramble, Germany’s Manuel Lettenbichler (KTM) secured his second podium result of 2019 to take over the series’ lead. But with Rockstar Energy Husqvarna Factory Racing’s Graham Jarvis (GB) winning rounds three and four, that momentum has put him out front heading into the second half of the season.

Millions Tune In To Watch WESS
Bringing WESS to life, the championship’s Exclusive Media Partner Red Bull Media House have been hugely active in capturing all the best action from each round of the series. Quenching Enduro fans’ thirst for footage, the championship has witnessed unprecedented growth over the 2018 series. With four rounds complete in 2019, WESS has been viewed over 31 million times, amassing 173 million minutes viewed. In comparison, at the end of the eight-round 2018 season, WESS was viewed 87 million times, amassing to 143 million minutes viewed. The WESS social media accounts have also continued to grow strongly. @irideWESS Instagram has since increased by over 22 per cent, while similarly Facebook has grown by 20 per cent to 35,000 Likes.

Breaking New Ground In Spain
Round four marked the first WESS race on Spanish soil. In what was the first of the series’ two visits to Spain for 2019, Hixpania Hard Enduro proved a great success and a welcomed edition to the series. The Five Elements organisation team pulled out all the stops to ensure a world-class event. A spectacular prologue on Friday evening saw the host town come alive to the sound of Enduro bikes, which was followed by a challenging Cross-Country race around the nearby lake on Saturday. Finishing off with a demanding Hard Enduro on Sunday in front of thousands of spectators, Hixpania Hard Enduro confidently took its place on Enduros top events table.

New Teams Rise To The Forefront
New to the paddock for 2019, Eurotek KTM, TTR Officine Rigamonti and now JD Gunnex KTM are making their presence felt. Holding down 10th overall, South Africa’s Travis Teasdale leads the way for Eurotek KTM. With two finishes inside the top-10, he also showed impressive form at Trèfle Lozérien AMV with 12th. Right behind him in 11th, Spain’s Pol Tarres is pushing hard for TTR Officine Rigamonti. Kicking his campaign off with 12th at round one, an eighth on home soil at round four shows he’s edging closer to the elusive top-five. Fourteenth at the series’ halfway point, JD Gunnex KTM’s David Cyprian is a regular inside the top-20 but will look to build on that with his favoured Red Bull Romaniacs next to come.

Breakthrough Rides
Outside of the fight for victory and a place on the podium, there have been a number of breakthrough rides of note. Sitting just outside the top-10 in 13th, Britain’s Jonathan Richardson (HTM Husqvarna) is impressing. The former top-flight Trials rider has successfully transferred his skills to Enduro with a well-earned 10th at round one. At round three in Austria, he showed his result was no fluke with a confidence-boosting 12th. Placing 11th at round four ensures Richardson is a rider to watch from here on out. Enjoying his debut season of WESS, Austrian Michael Walkner is working his way up the leader board. With a 24-25-26 scorecard at the opening three rounds, the 21-year-old claimed a season-best of 17th at round four to move himself up to 18th overall in the standings.

Spectator Turnout
Turning out in their droves to watch the world’s best Enduro riders in action, the spectator attendance for each round of the 2019 series has so far been equally as impressive as the racing. Across the three days of competition at Toyota Porto Extreme XL Lagares, Portugal showed their love for Enduro with up to 95,000 spectators – boosted by Saturday’s Porto prologue – lining the trackside to cheer competitors on. Despite the inclement weather, France’s Trèfle Lozérien AMV organisers were pleased to confirm 30,000 watched the Classic Enduro action. Celebrating its 25th edition in style, Austria’s Erzbergrodeo welcomed 45,000 Enduro fans through their gates, while up to 23,000 spectators flocked to Aguilar de Campoo for Spain’s Hixpania Hard Enduro.

The Rest Of The Season To Come
With four rounds in the books, the focus is now on the remaining four rounds in 2019. True to WESS form, a wide and challenging mix of Enduro disciplines await competitors. Set to celebrate its 16th edition, Red Bull Romaniacs is next on the list as riders contest the world’s toughest Hard Enduro Rallye. Offering advantage to traditional specialists, Hawkstone Park Cross-Country and BR2 Enduro Solsona classic enduro will see speeds rise before signing things off at Germany’s Getzenrodeo for the series finale on November 2nd. With Red Bull Media House broadcasting the action live on Red Bull TV, it’s sure to mark an exciting conclusion to this year’s battle in the race to become the ULTIMATE ENDURO CHAMPION.

The World Enduro Super Series continues with round five at Red Bull Romaniacs on July 30 – August 3.

Championship Standings (After Round 4 of 8)