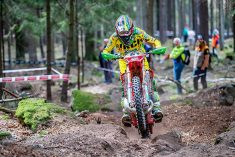 Ideal conditions welcomed all the competitors for the 6th round of the FIM Maxxis Enduro World Championship. Glorious late summer sunshine, spectacular special tests, and big battles. It all came together to offer a high-level show to the many spectators who had amassed throughout the three tests and three laps of the day.

Brad FREEMAN Shows His Dominance.
Brad FREEMAN (GBR-Beta) put in a performance worthy of his EnduroGP leader status; he set the best time on seven of the day’s tests! The young Brit did not make any mistakes, and always featured at the top of the timesheets. In addition to taking the day victory, his greatest satisfaction was to have been able to hold off his closest title rival, compatriot Steve HOLCOMBE (GBR-Beta).

The factory Beta rider was nevertheless still feeling fairly positive, especially as before the summer break HOLCOMBE suffered terribly with illness. He has shown that he has returned in better shape and as determined as ever. A catastrophic start to the first day in the Czech Republic ruined his hopes of catching up with FREEMAN. A broken brake cable and crooked handlebars cost HOLCOMBE a lot of time. But despite everything, he still finished 2nd on the day, 32 seconds behind FREEMAN. Having not ridden his bike since the Italian GP, the Beta rider knew this round would be tough due to this lack of bike time, so he was still satisfied with his performance.

Another Brit completes the overall podium! Danny MCCANNEY (GBR-TM) took 3rd overall on the first day in Uhlriske Janovice. The TM rider was his usual super-consistent self all day. He set the fastest time through the 2nd Extreme Test of the day, and finishes the day 53 seconds behind FREEMAN.

And if three Brits weren’t enough, this English trio were joined by Joe WOOTTON (GBR-Husqvarna)! The young Jolly Racing rider took his best result so far in Senior with 4th overall and a class victory, and confirms that the UK is producing a steady stream of strong and talented riders.

With this Great British lock out at the top, there wasn’t much chance for anyone else to get on the podium! Matteo CAVALLO (ITA-Sherco) was next up in 5th, Loïc LARRIEU (FRA-TM) 6th, and Alex SALVINI (ITA-Honda) 7th.

There was another great performance from Chile’s Benjamin HERRERA (CHI-Beta) too, 9th overall behind the handlebars of his brand new Beta 4-Stroke.

Andrea VERONA (ITA-TM), the 2019 Junior World Champion, took the opportunity at the Czech GP to make his debut among the ‘big boys’ in E1. Unfortunately for the Italian, the day was over before it properly began, and he went out due to a technical problem on the second lap. VERONA will try again tomorrow.

In E1, if he finishes 2nd tomorrow Brad FREEMAN could earn his 2nd World crown in the category. He took victory today ahead of Matteo CAVALLO and Davide GUARNERI (ITA-Honda).

The E2 class has a brand new winner in the form of Joe WOOTTON, who was thrilled to achieve his first ever class victory. Loïc LARRIEU was 2nd on the day, keeping SALVINI at bay in the last half of the day. The Frenchman therefore managed to take the lead of the provisional classification by just one point.

Junior: Wil RUPRECHT Makes a Strong Comeback
The Czech GP sees the return to competition of the Yamaha Johansson rider Wil RUPRECHT (AUS). In the absence of VERONA, and now feeling fully fit, he dominated the overall class. Leading from start to finish, he left no chance to any of his rivals to challenge him.

The Australian won in front of an impressive Antoine MAGAIN (BEL-KTM), who snatched second place from Theo ESPINASSE (FRA-Sherco) at the end of the day by just one and a half seconds!

The bad news of the day came from Jack EDMONDSON (GBR-Sherco), the likeable Brit was forced out of the race after fracturing his wrist.

In J1 the podium was the same as that of Junior Overall: RUPRECHT, MAGAIN and ESPINASSE. The J2 class went Enric FRANCISCO (SPA-KTM), ahead of Ruy BARBOSA (CHI-Husqvarna) and Léo LE QUÉRÉ (FRA-Sherco).

Youth 125CC: Hamish MACDONALD Creeps Closer to the Crown.
New Zealand’s MACDONALD made it his mission to come back from his broken shoulder with a vengeance. He won the class ahead of Matteo PAVONI (ITA-Beta) and Nathan BERERD (FRA-Husqvarna). The ultimate aim for ‘Hammy Mac’ this weekend is to get closer to sealing the Youth 125 Championship title. We could find out if he’s achieved this as early as tomorrow evening.

In the Champion Lubricants Enduro Open World Cup, Tom ELWOOD (GBR-Kawasaki) took another victory in the Open 4-Stroke category. The Brit is edging ever closer to winning the crown. Fraser FLOCKHART (GBR-Yamaha) and Robert RIEDEL (GER-KTM) completed the podium.

In Open 2-Stroke, title winner Gonçalo REIS (POR-Beta) is absent this weekend, so his opponents mounted a charge for the victory. Patrick HALGAS (SVK-Beta) managed it over Benet Gomez (ESP-Gas Gas) and Rafal Bracik (POL-Gas Gas).

This first day of the Grand Prix of Czech Republic was spectacular in every respect.
We’ve witnessed a lot of action, and we’ve also learned that this year’s British ISDE Team (FREEMAN-HOLCOMBE-MCCANNEY-WOOTTON) could be very hard to beat in Portugal next month! See you tomorrow for another great day of racing in the Czech Republic!

Brad FREEMAN (GBR-Beta): “I’m just delighted with how my day went. I was able to dominate. After my injury in Greece and my broken collarbone I had only one idea in mind to keep myself focused, and to get the operation and recovery done as soon as possible; that idea is the title and the day victories. It seems that everything is going well so far. It’s been a dream since I was little to become World Champion, and I’ll always go after that.”

Steve HOLCOMBE (GBR-Beta): “I’m just happy to finish today without being in the state I was in Greece and Italy, where my illness made me suffer so much. I’d like to win at every race, but you have to be realistic, and today I wasn’t not able to keep pace with Brad. I’m happy with my 2nd place because it’s the best I could do after the bad start.”

Joe WOOTTON (GBR-Husqvarna): “I don’t know what to say! I’m truly speechless! Even I am surprised to find myself on the top step of the podium! All I can tell you is that I’ve been working really hard since the beginning of the season and finally that has been rewarded. For tomorrow I will not change my state of mind and I’ll try to stay with that same winning spirit”