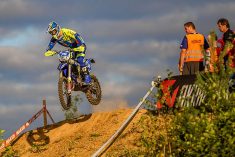 Just two weeks after the Grand Prix of the Czech Republic, which was thrilling and challenging in equal measure, it is already time for the grand finale of the 2019 season; that takes place for the first time in three years in France. With 4 titles and 2 World Cups still yet to be awarded, this 7th and last event of a fantastic 2019 season is already a hot prospect…

A Premier for Moto Club Livradois
Organiser of the famous Rand’Auvergne for more than 29 years, Moto Club Livradois has decided to go for a new challenge in 2019 by hosting the grand finale of the Maxxis FIM EnduroGP World Championship – three years after the last season-closer was held in France, in Cahors. The Moto Club has put together a route consisting of 85km that the EnduroGP riders will have to tackle three times per day. The paddock, the start line, and the Parc Fermé will all be located at the former Ambert train station. From there, the riders will go to the Technomousse Xtreme Test, located at the MX track in the city. Before heading to the Champion Enduro Test, which looks just as good as that of the Czech Republic! This will likely be the test where positions and titles could be decided! The riders will then finish the lap at the Maxxis Cross Test, which will be close to Ambert. Friday’s Akrapovic Super Test will be in the same location as the Xtreme Test and will start at 19.00.

The Moto Club and the French fans can’t wait to see the return of the best riders in the world to their country, and they will witness the awarding of the EGP, E2, E3, Youth, J2, and Woman titles. Undoubtedly, it will be an unforgettable weekend!

FREEMAN With One Hand on the Title? HOLCOMBE Fighting Back to the Top?
The domination of Brad FREEMAN (GB – Beta Boano) in the Czech Republic gives him a 10 point lead on his rival and defending champion, Steve HOLCOMBE (GB – Beta)…
While many people may be expecting to see the young Beta Boano rider get the job done this weekend in Ambert, we know that anything can happen in motorsports and FREEMAN will have to keep up his blistering pace while avoiding physical or mechanical troubles.
For his part, while HOLCOMBE is still not 100% ‘bike fit’, having not ridden during the summer break due to his illness, the Brit will surely be on the attack and on the lookout for the slightest mistake from his compatriot. He would really love to keep his crown for another season. This final promises to be intense until the very last test.
Danny MCCANNEY (GB – TM), who has already secured his place in the Top 3 of the standings, will be keen to end the season on a high and battle it out with the two riders ahead of him.
Keep an eye on Matteo CAVALLO (I – Sherco), Loïc LARRIEU (F – TM), Alex SALVINI (I – Honda) and Christophe CHARLIER (F – Honda) who all have the talent and the speed to fight for the EnduroGP podium, and could get involved with the FREEMAN-HOLCOMBE fight.

The battle for the E2 title will be just as intense as that for the EnduroGP crown. Indeed, only two points separate the leader, Alex SALVINI, from French-fan-favourite Loïc LARRIEU. With 40 points still on the table, this class should offer great spectacle to the spectators, many of whom would love to see the factory TM rider take his first World Enduro title. While others will be cheering on the charismatic and aggressive SALVINI, who was so unlucky last year.
There’s another Frenchman waiting to get in the mix, Christophe CHARLIER, who at 19 points behind SALVINI holds on to a slim title hope.
Meanwhile, Benjamin HERRERA (CL – Beta) and Eero REMES (SF – Yamaha) will seek to secure their places in the Top 5 against riders such as Antoine BASSET (F – Husqvarna) and Joe WOOTTON (GB – Husqvarna) who are full of confidence.

While the tension will be less in the E3 class, nothing is decided yet…
Steve HOLCOMBE holds 18 points ahead of Danny MCCANNEY, and could therefore be crowned on Saturday if he finishes in front of the TM rider. But he won’t be taking anything for granted.
We also have a good duel for third in the standings between the two Frenchmen, Anthony GESLIN (Beta) and David ABGRALL (Beta). Currently tied on points.

Finally in E1, where the title was taken by FREEMAN in the Czech Republic, there’s still a battle on for ‘Vice-Champion’ (Runner-Up) between old-stager Thomas OLDRATI (I – Honda) and class rookie Matteo CAVALLO (I – Sherco). Only 5 points separate the two Italians.

MACDONALD, Champion on Saturday?
In Junior, with Overall Champion Andrea VERONA (I – TM) having already graduated to the Senior ranks, the battle for the podium is more open than ever! But on top of that, the duel between Theo ESPINASSE (F – Sherco) and Enric FRANCISCO (E – KTM) for the Runner-Up spot will be very interesting since only 5 points separate them. It will also be necessary to keep an eye on the performances of Wil RUPRECHT (AUS – Yamaha), Roni KYTÖNEN (SF – Husqvarna) and Antoine MAGAIN (B – KTM), who all performed well last time out.

In J1, where VERONA has already claimed the title, the battle for the day victories will likely be exciting between ESPINASSE, MAGAIN and KYTÖNEN. In J2, after the injury suffered by Jack EDMONDSON in Uhrliske Janovice, Enric FRANCISCO needs just a handful of points to be crowned Champion.

In Youth 125cc, Hamish MACDONALD (NZ – Sherco) needs just 9 more points to win the title and go down in history as the first New Zealander to be Enduro World Champion!
But no doubt that Matteo PAVONI (I – Beta Boano) and Claudio SPANU (I – Husqvarna) will fight hard to topple the Kiwi, taking advantage of any problems.

Finally, this Acerbis Grand Prix of France will also host the only round of the Women’s Cup this season, where there will be no fewer than 21 riders ready to fight for the crown. Finland’s Sanna KARKKAINEN (KTM) may well be the favourite to retain her 2018 title, but many rides are ready to take the crown such as Jane DANIELS (GB – Husqvarna) – who suffered terrible luck in last year’s finale, Jessica GARDINER (AUS – Yamaha), Juliette BERREZ (F – Yamaha), Audrey ROSSAT (F – Husqvarna), Mireia BADIA (E – Husqvarna), Maribel GIORDANI (ARG – Beta) and member of the famous Nitro Circus crew and winner of several X-Games events, Tarah GIEGER (USA – Honda).

This French GP, the last act of a breathtaking 2019 season, will be unmissable. After the riders have battled, struggled, and celebrated for the last 8 months, this final where many titles are still to be decided will see Enduro at its best…

See you this weekend in Ambert!