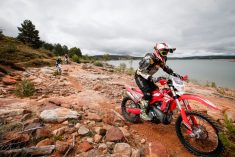 Wels, Austria, October 2, 2019 — The penultimate round of the World Enduro Super Series travels to Spain this weekend for the BR2 Enduro Solsona.
Hosted by Club Sip Sport in cooperation with Motor Club Solsones, BR2 Enduro Solsona is the sister Classic Enduro event to the popular Bassella Race 1. Staged over three days, Friday will see proceedings get underway with the Super Test, where riders will go head-to-head in groups of 10.
Saturday and Sunday will see competitors ride a course looping Solsona and nearby Bassella with three special tests – Enduro, Cross, Extreme – each lap, before ending the day with the exciting Super Test.

Keeping in spirit with WESS, an amateur, non-competitive ride will take place on Saturday allowing riders to challenge themselves on the same course as ridden by the stars of WESS.

Extending his championship lead with a runner-up result last time out at the Hawkstone Park Cross-Country, Manuel Lettenbichler (KTM – GER) will look for a repeat performance in Spain. Finishing second in Great Britain came as a surprise to the German Hard Enduro expert, but it’s also boosted his confidence at a critical time in the series. Together with his top-15 Classic Enduro result earlier this year at Trefle Lozerien AMV, Lettenbichler will be aiming to keep his rivals at bay.

For Red Bull KTM Factory Racing’s Josep Garcia, BR2 Enduro Solsona is very much a home race. The round two winner lives just 20 minutes away and so will be highly motivated to secure his second victory of 2019 on home soil.

However, despite his world-class Classic Enduro skills, Garcia showed a weakness in his armour at Hawkstone Park Cross-Country due to a hand injury he’s carrying. With some much-needed recovery time before his home race, he’ll regroup and aim to put his KTM on the top step of the podium once again.

Hoping to have a say in that happening is Garcia’s teammate Nathan Watson (GB). The British rider was incredibly impressive at round six, charging to victory. Beginning to peak at just the right time in his favoured events, Watson is 100 per cent focused on making it two race wins in a row.

Finishing third at round six, Jonny Walker (GB) made a welcomed return to the podium, putting to bed his season-ending injury of 2018. Now motivated to do it again, Walker has always been a strong threat in Classic Enduro and will use that to his advantage to overhaul rival Alfredo Gomez (Husqvarna – ESP) in the fight for a championship top-three.

Taddy Blazusiak (KTM) is familiar with the terrain BR2 Enduro Solsona will offer. Eager to use that knowledge to his advantage, expect Blazusiak to figure highly in the results.

Sitting second and third in the championship standings, BR2 Enduro Solsona will be another nervous challenge for Rockstar Energy Husqvarna Factory Racing’s Graham Jarvis (GB) and Alfredo Gomez (ESP). Both Hard Enduro specialists acquitted themselves well with top-10 results at round six and know a similar result will hold them in good stead ahead of GetzenRodeo. For Gomez the race also marks his second home event of the year.

BR2 Enduro Solsona will also be a home race for TTR Officine Rigamonti Husqvarna’s Pol Tarres. Another resident of the region, Tarres – despite being a Trials rider turned Hard Enduro expert – knows the terrain well and will be keen for a strong finish while using the Super Test to his advantage. A proven quick adapter, a strong finish will see him move up the top-10 leaderboard.

With their home race successfully behind them, Eurotek KTM arrive in Spain with good momentum. William Hoare (GB) achieved a career-best seventh last time out and as a rider who is coming on strong in the closing stages of the championship, will be a rider to watch for again.

So too will teammate Travis Teasdale (RSA). A mechanical issue denied him a better result than 11th at Hawkstone Park Cross-Country, but based on his impressive 12th at Trefle Lozerien AMV, the South African will be a threat in Spain.

Backing up his Silver class runner-up result at Red Bull Romaniacs, Triple D Motorsport’s Sam Winterburn (KTM – GB) finished 12th at Hawkstone Park Cross-Country to move inside the top-15 in the standings. With confidence growing, the privateer will be a rider to watch for.

Austria’s Michael Walkner (KTM) sits 12th in the championship chase. Walkner will look to gather another good points haul at the penultimate round of the 2019 series.

While Garcia naturally starts as favourite for a Spanish win, the BR2 Enduro Solsona will have a host of national riders hungry to make their mark in WESS. Enrico Francisco (KTM) tops the list, with the Under 21 rider expected to challenge for the top step of the podium.

With additional top riders to watch for including Sandra Gomez (Husqvarna), Leon brothers Sergi and Xavier, plus Mireia Badia ensures lots of national talent to cheer for.

The penultimate round of the World Enduro Super Series takes place at BR2 Enduro Solsona in Solsona, Spain on October 4-6.