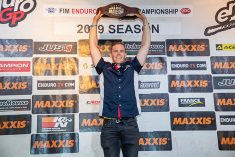 HOLCOMBE Keeps the Belt for a 3rd Year in a Row!
While most current riders have sadly not had the opportunity to compete with the great Mika AHOLA, due to their age, the “Brave One” Trophy remains highly coveted and means a lot for everyone in EnduroGP, because of Mika’s legendary status, riding skills, and fantastic personality. But this year has been tougher than ever on the Enduro Tests and Steve HOLCOMBE (GB – Beta) confessed on Sunday night, when gladly accepting the belt, that he did not know if he could manage to win it this season…

Arriving in Ambert, France, with just a 5-point lead over Brad FREEMAN (GB – Beta Boano) and 23 points over Danny MCCANNEY (GB – TM), HOLCOMBE had to give everything to keep the Mika Ahola “Brave One” Trophy at home. Which he did perfectly by holding off attacks from his two main rivals.
The factory Beta rider finishes the season with a 3rd and a 4th place on the Enduro Test in Ambert, securing victory for a 3rd consecutive year. Last year he became the only rider to achieve the double, and now he’s done a hattrick!
Solid all weekend (1/3), MCCANNEY must finally settle for 3rd place on the podium while FREEMAN (2/6) falls 6 points short of the coveted trophy!
Behind the British trio we find Loïc LARRIEU (F – TM) and Alex SALVINI (I – Honda) in the Top 5.
Also note the presence of 5 Italian riders in the Top 10: SALVINI, CAVALLO (Sherco), OLDRATI (Honda), VERONA (TM) and REDONDI (Husqvarna)! As well as impressive Youth 125cc riders Hamish MACDONALD (NZ – Sherco), 28th and Nathan BERERD (F – Husqvarna), 29th in the final standings!

For the 8th year in a row, this Mika Ahola “Brave One” Trophy has been a great success with the riders, and proves once again that the Enduro Tests are clearly the toughest in the Maxxis FIM EnduroGP World Championship…
We’re already thinking about 2020: can someone beat HOLCOMBE and wear the belt?!