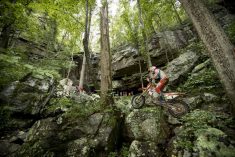 Wels, Austria – November 1, 2019 – WESS Promotion GmbH are pleased to announce the renaming of the innovative, mixed-discipline enduro series from the start of 2020, to be officially known as the WESS ENDURO WORLD CHAMPIONSHIP. In addition, WESS Promotion GmbH also announce the championship schedule for 2020. Featuring eight rounds and extending into the United States, the WESS Enduro World Championship is set to grow in stature and popularity as the race to become the ULTIMATE ENDURO WORLD CHAMPION 2020 unfolds.

Winfried Kerschhaggl – WESS ENDURO WORLD CHAMPIONSHIP Series Manager:
“The Fastest Riders, the Best Events and a Global Presence: What more do you need for a real WORLD CHAMPIONSHIP? Expanding the series outside of Europe was the last ingredient missing in becoming a credible and true Enduro World Championship. With TKO now being part of our 2020 calendar everything has come together perfectly for what we’re sure will be a thrilling championship.”

Now entering its third season, the WESS Enduro World Championship continues to thrive, strengthening its vision of a series that encompasses all Enduro formats while providing a global platform for both professional and privateer riders to compete together.

For 2020 the championship retains many of its world-renowned favourites from seasons one and two and includes the welcomed return of the popular Red Bull 111 Megawatt event in Poland. Breaking new ground, the championship heads to the United States and the well-established Tennessee Knockout.

During the month of June, Austria’s iconic Erzbergrodeo Red Bull Hare Scramble will host round three, while Red Bull 111 Megawatt makes a welcome return to the WESS Enduro World Championship for round four.

Romania’s Red Bull Romaniacs will spectacularly kickstart the second half of the season in late July for round five. Then venturing outside of Europe for the first time and cementing itself as a true world championship, the United States’ most-prestigious Hard Enduro – Tennessee Knockout – will be eagerly anticipated on August 15-16.

Switching gears to Cross-Country racing, the fabled Hawkstone Park in Great Britain will mark the penultimate round of the series in September with the Hawkstone Park Cross-Country. Following its well-received addition to the 2019 series, Spain’s Hixpania Hard Enduro takes the honour of hosting an October championship finale in what’s sure to become a thrilling crowning of the ULTIMATE ENDURO WORLD CHAMPION 2020.

For 2020, the WESS Enduro World Championship will continue to strengthen its relationship with Red Bull Media House as the series’ Exclusive Media Partner. As a result, Enduro fans will benefit from their extensive and unrivalled coverage on Red Bull TV and social media platforms, ensuring a single moment of the action is never missed.

Philipp Stossier – WESS ENDURO WORLD CHAMPIONSHIP Managing Director:
“It’s fulfilling to have the 2020 schedule in place before the current championship ends. We’ve worked hard to listen to feedback from competitors, key industry people and the fans themselves to deliver a true world-class mixed discipline Enduro championship. Continuing to work closely with Red Bull Media House ensures the WESS Enduro World Championship will benefit from unrivalled coverage that will push both the sport and its athletes into the daily lives of Enduro fans all around the world. 2020 promises to be a fantastic season.”

Anna-Larissa Redinger – WESS ENDURO WORLD CHAMPIONSHIP Marketing Manager:
“We’re very excited for what the 2020 WESS Enduro World Championship will bring. Now entering our third season, it’s rewarding to see the series grow and expand like it has. With eight rounds planned for next year we feel we’ve managed to provide an enjoyable and challenging mix of Enduro disciplines to test competitors. Welcoming Tennessee Knockout in the USA to the schedule allows us to venture into a new continent and become the true Enduro World Championship that we originally set out to be. With what we feel is a perfect mix of races for professional and privateer competitors alike, we’re looking forward to watching the battle to become the ULTIMATE ENDURO WORLD CHAMPION 2020 unfold.”