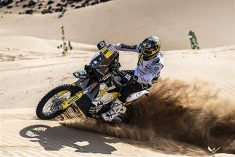 Rockstar Energy Husqvarna Factory Racing’s Pablo Quintanilla and Andrew Short have completed their pre-race shakedown and are all set to begin their participation in the 2020 Dakar Rally, which starts with stage one on Sunday, January 5.

Following months of preparation, the two-rider team is now fully set to take on the world’s most challenging cross-country rally. Held in the Middle East for the first time, this 42nd edition of the Dakar will be run over 12 gruelling stages, covering over 7,800 kilometres.

Pablo Quintanilla came agonisingly close to fulfilling his dream of a Dakar win in 2019. Now, with the 2020 race breaking new ground and offering a level playing field to all competitors, the two-time FIM Cross-Country Rallies World Champion sees this year’s event as the perfect opportunity to secure his maiden victory. Settled aboard his FR 450 Rally machine, Quintanilla will be going all-out for a strong result on Sunday’s stage one.

With another year of rally racing experience, and his first world championship event victory secured, Andrew Short carries increased confidence into the 2020 Dakar Rally. Despite a small fall in testing, Short is aiming to secure his best Dakar finish to date.

Held exclusively in Saudi Arabia, the 12-stage 2020 Dakar Rally commences with a 752-kilometre opening stage on January 5. The race looks set to challenge all competitors with an exciting mixture of fresh terrain combined with difficult navigation. Concluding on January 17, the race will cover a total of close to 8,000 kilometres through the Middle Eastern desert.

Pablo Quintanilla: “It was nice to be back on the bike after a lot of travelling and preparation before the event. The terrain we saw in the shakedown test was a little different to what we’re used to – the sand is extremely soft and will be quite tricky to race on, I think. It’s definitely going to make the event really tough physically, but then it’s the same for everyone. Personally, I feel really good ahead of the start on Sunday. I feel fit, but also quite relaxed and confident this year. This is my eighth Dakar, so I am starting to know what to expect.”

Andrew Short: “I think everyone is really excited to be here in Saudi and get racing again. The atmosphere inside the team is excellent and we’re all looking forward to the event now. My feeling on the bike is good, I did have a little crash yesterday but luckily didn’t do myself, or the bike, too much damage. People have been saying how soft the terrain is, but for me desert is desert, no matter where you are in the world. From a sporting perspective, racing here in Saudi Arabia for the first time feels great and I’m honoured to be a part of this latest chapter in the Dakar. It’s going to be a massive challenge and a very long race, but right now, I just can’t wait to get started.”

Pela Renet – Rockstar Energy Husqvarna Factory Racing Rally Team Manager: “Things are going well here in Saudi Arabia – we have a new country and a new challenge to face for the Dakar this year. The shakedown test went very well, Andrew had a small crash but was thankfully uninjured. Both riders are all set for the race now and really motivated. The team have been great so far too, everyone is working together well and focused on the same goal. We’re really looking forward to Sunday and the start of the event.”