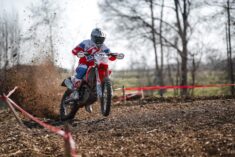 Beta Factory Racing’s Steve Holcombe has begun his 2021 season in the best possible way, claiming victory at the opening round of the Italian Enduro Championship.
! Steve takes victory at opening race of the season
! Beta RR Racing 4T 350 tops eight of 18 special test wins
! Holcombe claimed a clear 14-second margin of victory
Getting the new season up and running, the opening round of the Italian Enduro Championship in Passirano proved a positive first shakedown for Steve as he gradually begins his preparation for the Enduro World Championship opener in June.
The single-day race, which featured no fewer than 18 special tests, proved the perfect event for the seven-time world champion, and reigning Italian Enduro Champion, to get back into competitive action on his Beta RR Racing 4T 350 following the off-season.
After a steady opening lap, Steve quietly began to improve both his pace and position. A strong push during the second half of the day saw him work his way to the top of the standings. Holding strong, he raced on, remained out front and claimed an eventual 14-second margin of victory.
The Italian Enduro Championship continues with rounds two and three in Custonaci on March 27/28.

Steve Holcombe: “I can’t think of a better way to start off 2021 than with a win. I honestly came here aiming for the podium, so to hit the top step is more than perfect. Today was good to be honest. I didn’t feel like I did anything exciting, I just played it steady really. It took the opening lap to knock the race rust off and get back into the swing of special tests again. As the day progressed, I increased my pace little by little, picked up a few test wins and got the job done. I’m not trying to make it sound boring or anything, it just all sort of worked out. I think I’ve surprised myself with the win. But it’s great to be back racing. Twelve months ago everything was so different, so being back in the paddock, having fun with the team and just being back in race mode like we planned is brilliant. Aside from a little bit of testing before coming here, I’m really only just getting back into riding again after the off season. But with EnduroGP not starting until June, we’ve time on our side to keep building on what we achieved today.”