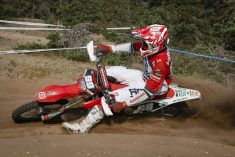 Spain’s Josep Garcia (KTM) has ended the third round of the BORILLI FIM EnduroGP World Championship, the GP of Estonia in Saaremaa, on a high after securing EnduroGP class victory on day two. Making it a perfect weekend for the Spaniard following his overall day one victory, Garcia overhauled Britain’s Brad Freeman (Beta) on the final special test of the event to secure the top step of the podium on day two. At the end of another successful weekend for Andrea Verona (GASGAS), the Italian finished up on the EnduroGP podium in third.

Italy’s Lorenzo Macoritto (TM) got the better of his teammate and day one winner Matteo Pavoni to triumph in Enduro Junior, while Sweden’s Albin Norrbin (Fantic) was the winner for the second day running in Enduro Youth.

Day two in Estonia was all about two riders – Freeman and Garcia. From the off the duo positioned themselves at the head of the EnduroGP field, setting a pace out front no other rider could match. Freeman remained in control for the majority of the day and looked to have the Spaniard beaten in the ever-deteriorating conditions. Freeman was strongest in the CHAMPION Enduro Test, while Garcia proved faster in the ACERBIS Cross Test. Entering the final test of the day, the short AKRAPOVIC Super Test, Garcia knew he needed to give it everything to overcome his two second deficit to Freeman. Doing exactly that, he emerged victorious and showed himself as a new title threat to point’s leader Freeman ahead of next weekend’s AIRMOUSSE GP of Sweden.

“A double win! It’s been a dream weekend for sure,” told Garcia. “Conditions today were so rough out there and it was a big fight all day between Brad and myself for the EnduroGP win. Coming into the final test the gap was two seconds and I knew I had to put it all on the line. When I came out of the test and saw I had got the win I was so happy. Everything is feeling good right now and I’m excited to get to Sweden next weekend.”

Finding his way onto the podium for the second day in a row, it was another strong performance from Verona. Clearly enjoying the deep sandy terrain, the GASGAS rider held off his Enduro2 classmate Davide Guarneri (Fantic) for third overall. Still feeling the effects from his crashes on day one, Will Ruprecht (TM) had to be content with fifth.

Just like Garcia in EnduroGP, Andrea Verona (GASGAS) enjoyed a perfect weekend topping the Enduro1 class on both days in Saaremaa © Future7 Media

Beginning to show itself as a two-horse race, the Enduro1 honours were again fought out between Verona and Guarneri. With both riders pushing each other in the overall standings, they ended their day over 90 seconds clear of the field. Verona got the better of Guarneri again to take the win.In a change of positions, Samuele Bernardini (Honda) recorded his second podium result of the year with third, while Davide Soreca (Husqvarna) ensured Italy swept the first four positions in Enduro1. Sweden’s Kilip Bengtsson (Husqvarna) was fifth and will look to improve on that on home soil next weekend.

With the EnduroGP win in one hand, Garcia took home the Enduro2 victory with the other. The Spaniard was nearly all but untouchable in the sandy terrain, claiming 11 of the day’s 12 Enduro2 special test wins. Admittedly not at his best following his crashes on day one, Ruprecht had to settle for the runner-up result. Gaining momentum in this year’s championship, New Zealand’s Hamish MacDonald carded another third place finish in Enduro2.

Making no mistakes today, Freeman dominated Enduro3 as his battle with Garcia for the overall saw him win in E3 by a massive two minutes and eight seconds. Behind him, Sherco’s Daniel McCanney found an extra turn of speed to leap past Spain’s Jaume Betriu (KTM) and into second place. Slipping down to third for the first time in 2021, Betriu completed the podium. Again, the Husqvarna duo of Jamie McCanney and Andrew Wilksch rounded out the top five.

“Hats off to Josep, he rode a great race and just got me for the EnduroGP overall on the final special test,” said Freeman. “We were fighting all day for victory and that also helped me to pull clear for another Enduro3 class win. I feel my riding is pretty solid at the minute, I’m consistently up front, so the goal is to keep things rolling in Sweden.”

Turning the tables on his teammate, Macoritto raced his way onto the top step of the podium in Enduro Junior. Having showed he had the pace on day one to win, he matched it with consistency on day two to get the job done. Despite his best efforts of securing a double victory by winning the final two tests, Pavoni couldn’t bridge the gap to Macoritto and finished second.

Another dominant win by Albin Norrbin puts him in the driving seat in Enduro Youth. The Swede was on flying form and will start as the rider to beat in his home race next weekend. Ensuring an all-Scandinavian affair on the podium, Finland’s Pyry Juupaluoma (Husqvarna) and Samuli Puhakainen (TM) were second and third respectively. Kevin Cristino (Fantic) and Albert Fontova (KTM) completed the top five.

The BORILLI FIM EnduroGP World Championship continues with round four next weekend, the AIRMOUSSE GP of Sweden.