Promising a taste of Italian style enduro, the stage is set for the ninety-fifth running of the FIM International Six Days of Enduro (ISDE). Taking place in the Apennine Mountains between Lombardy and Piedmont, the event will run from Monday 30 August through to Saturday 4 September when it will finish with the traditional final day motocross races. 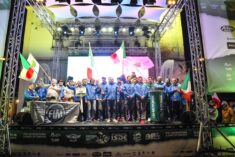 Bringing the event back to Italy for the first time since 2013, when it was held on the island of Sardinia, for 2021 the FIM’s longest running motorcycle race will welcome over six hundred and fifty competitors from thirty nations to Rivanazzano Terme, for what is expected to be six days of picturesque, but challenging competition.

Postponed in 2020 due to the global COVID pandemic, this year the FIM ISDE has attracted riders from all over the World, both World-class competitors and enthusiastic amateurs, all wanting to enjoy the most-prestigious event on the enduro calendar.

Ensuring a truly picturesque backdrop to the ninety-fifth running of the FIM ISDE, the mountain trails of the Lombardy-Piedmont region will deliver plenty of challenges as they play their part in determining the outcome of this year’s event. With the racing taking riders deep into the beautiful Italian countryside, the ‘heart’ of the event will be at the Rivanazzo Terme airport, where the paddock will become the temporary home for all competitors and their service crews.

On days one, two, and three riders will compete over one lap of one hundred and ninety-five kilometres, riding for seven-and-a-half hours each day and completing numerous cross and enduro special tests along the way. Days four and five will feature a different course to that used during the first half of the event, again featuring a mix of cross and enduro special tests and totalling one hundred and ninety-eight kilometres. The sixth and final day will feature the closing motocross races, at the Valle Scrivia circuit in Cassano Spinola.

Of the twenty-one World Trophy teams entered into this year’s FIM ISDE it is defending champions the USA – winners last time out in Portugal in 2019 – and host nation Italy that most are looking at to battle it out for top honours. Focused firmly on victory, the USA squad mixes experience with lesser well known racers with Taylor Robert (KTM), Ryan Sipes (GASGAS), Michael Layne (Yamaha), and Jonathan Girroir (GASGAS) ready to compete for the top step of the podium.

Wanting to top the World Trophy competition for the first time since 2007, Andrea Verona (GASGAS), Davide Guarneri (Fantic), Thomas Oldrati (Honda), and Matteo Cavallo (TM) enter their home FIM ISDE focused only on winning. A team that on paper is arguably the strongest in the competition, the Italian quartet will compete with a sizeable home advantage, although will also have to deal with the pressure of expectation.

One team that could play a key role in the outcome of the final World Trophy team results, and possibly be a contender for top honours, is Spain. Lead by Josep Garcia (KTM), together with Jaume Betriu (KTM), Marc Sans (Husqvarna), and Cristobal Guerrero (Beta) the Spaniards will likely rise to the occasion and benefit from the home like dry Italian terrain. Of the remaining four-rider World Trophy squads France and Sweden will both be looking to challenge for a place on the end-of-event podium.

With defending Junior World Trophy class winners Australia absent from the ninety-fifth FIM ISDE the battle in the Junior division is wide open. But, with two of the fastest junior riders in the 2021 Borilli FIM EnduroGP World Championship among their three-rider squad, Italy will likely take some stopping. Fielding Lorenzo Macoritto (TM), Manalo Morettini (KTM), and Matteo Pavoni (TM), Italy, on home soil, will be out to impress and put themselves back on top in the Junior World Trophy category.

Runners-up last time out in Portugal, the USA will be looking to pile the pressure on their Italian rivals, hoping to show they have the speed to go one better than they did in 2019 and challenge for the win with Cody Barnes (Honda), Dante Oliveira (KTM), and Austin Walton (Husqvarna).

Can the USA win again in the Women’s World Trophy?

Defending their Women’s World Trophy top spot is the number one goal for Americans Brandy Richards (KTM), Rachel Gutish (Husqvarna), and Britney Gallegos (Husqvarna). Claiming a comfortable winning margin over Germany and Great Britain in Portugal in 2019, the USA will start the ninety-fifth FIM ISDE wanting to do nothing but repeat that success. If they are to be successful, they will once again have to fend off Germany, as well as a stronger than ever Great Britain team.

Eight Women’s World Trophy teams will take to the start in Rivanazzano Terme with the USA the notable exception in an otherwise all-European line-up. With Germany fielding an all-new squad of Stefanie Sonnenberg (Beta), Tanja Schlosser (Beta), and Samantha Buhmann (Beta), like the Great Britain trio of Jane Daniels (Fantic), Nieve Holmes (GASGAS), and Rosie Rowett (KTM), all will be competing on 250cc four-stroke machinery.

The 2021 FIM International Six Days of Enduro gets underway on Monday 30 August through Saturday 4 September in Rivanazzano Terme, Lombardy-Piedmont, Italy.