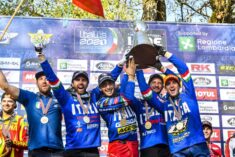 Bringing the ninety fifth running of the International Six Days of Enduro (ISDE) to a thrilling climax, the sixth and final day of action saw Italy do what they have looked like doing ever since the start of the event as they finally lifted the World Trophy team trophy, much to the delight of their home fans. Making it a memorable double for Italy, the host nation also topped the Junior World Trophy category, while the USA put the finishing touches to their incredible week-long performance to win in the Women’s World Trophy category.

“Today, wasn’t the best for me, I had a bad jump from the gate in my motocross race, so I had to push hard to finish fourth,” a delighted Andrea Verona said. “But my result wasn’t too important today – what is important is that Italy won the World Trophy and Junior World Trophy classes, and I was also the fastest Enduro1 rider overall. To be an Italian and to be a part of your national team competing and winning at home, it’s incredible.”

With strong final day results from Josep Garcia (KTM) and Jaume Betriu (KTM), Spain, like Italy ahead of them, put the finishing touches to a solid week-long performance. Not quite able to match the pace of the home nation, Spain nevertheless did all they could to win, finishing as deserved runners-up.

Entering the event with hopes of claiming another World Trophy team win, the USA completed their week as the third fastest team, having not quite had the pace to challenge the two European squads ahead of them.

Sweden completed a successful ISDE campaign in fourth in the World Trophy competition, finishing closer to third-placed USA than many would have guessed at the start of the competition and comfortably ahead of fifth place Portugal. The Czech Republic, Canada, Brazil, Belgium, and Germany rounded out the top-ten World trophy Teams.

Ending their winning Junior World Trophy campaign eight minutes and thirty-one seconds ahead of second-placed France, Italy’s Lorenzo Macoritto (TM), Manolo Morettini (KTM), and Matteo Pavoni (TM) delivered a dominant team performance. Fast from the start of the event, and remaining that way day after day, despite the best efforts of France and Sweden, Italy did what they needed to do on day six and completed their amazing week.

“This week has been very good for me, and of course the team,” commented Pavoni. “I was able to start fast, which was very important. I like this terrain and that has helped me a lot. After the first few days I was more calm with my riding, no big risks. As a team we knew that we could produce a good result, and we have. We’ve had a lot of dust on some special tests this week, so taking no risks has been very important to our team the last few days. Today, we knew what we needed to do, and, well, it’s fantastic to win.”

With their World Trophy teammates enduring a rough week, France’s Junior World Trophy team kept themselves ahead of Sweden to secure a deserved runner-up result. With Italy, France, and Sweden, separated by less than ten minutes after more than thirteen hours of special test action, the three nations all did themselves proud.

Some way back from Sweden, Chile finished fourth ahead of the Czech Republic, Norway, The Netherlands, Germany, Belgium, and Portugal.

In the Women’s Trophy, Team USA put the finishing touches to their dominant week-long performance to complete the 2021 ISDE just over fifteen minutes ahead of second-placed Great Britain. Once again it was Brandy Richards (KTM) who stole the show, winning the women’s day six motocross race ahead of Spain’s Mireia Badia (GASGAS) and Rachel Gutish (Husqvarna) and in doing so completing her amazing week with a dominant victory.

“Today’s been the cherry on an awesome ISDE cake for me, I’ve managed to win each and every special test during this year’s ISDE,” enthused Brandy after her inspiring week-long performance. “It’s what I set out to do, and I’ve done it. It’s pretty surreal, it hasn’t really sunk in yet. I really upped my training ahead of this event, and it paid off. As a team we did great, we’ve all ridden well and to win for Team USA is awesome.”

With Spain rounding out the podium, fourth went to Portugal, ahead of Sweden, Germany, Italy, and France, with France being the only team unable to get all three of their riders to the finish of the event.

Securing his first ever outright individual ISDE win, Josep Garcia (KTM) ended the 2021 ISDE as the undisputed overall fastest rider. Making his intentions of winning clear from the very beginning of the event, Garcia’s eventual winning margin was one minute and fifty-six seconds.

“This is a dream come true for me,” expressed Garcia. “To win the overall, to finish second with Spain in the World Trophy, it’s been an incredible week. Right now I am so happy, also with the pressure gone, it’s a crazy mix of emotions. When you have finished second overall twice, and you set the goal to win overall, well, there is so much that goes into trying to go one better than before. I managed it with the support of my team, it’s incredible.”

While unable to stop Garcia concluding the event as the outright fastest rider, Andrea Verona (GASGAS) was able to end his week as the fastest Enduro1 class rider. Carrying his strong world championship pace into the event, Verona took to the top of the E1 result sheets on day one and remained there throughout the event.

The competition’s fastest Enduro2 rider by virtue of being the event’s overall fastest competitor, Josep Garcia (KTM) sat comfortably ahead of his closest E2 challenger having been pushed hardest by E1 and E3 mounted riders throughout the week. Second in E2 went to USA’s Taylor Robert with Dante Oliveira (KTM) third-fastest.

Showing that nothing is over until after the final day motocross races are completed, in the Club team competition, Team Ostra Enduro 1 leapfrogged ahead of day five class leaders MC Sebino to take the win. Twenty seconds behind going into the final motocross races, come the end of the final day they sat at the top of the results and just over one-minute up on MC Sebino. Third went to MX Pavia Senior.

Day six brought a fitting climax and close to the 2021 FIM ISDE.