The 96th edition of the FIM International Six Days of Enduro (ISDE) will take place at Puy en Velay – France, the capital of the Haute-Loire department in the heart of the Auvergne region – Rhône–Alpes, from Monday 29 August to Saturday 3 September 2022. 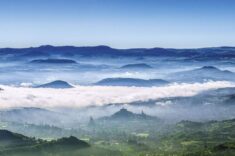 The first edition of the ISDE in France dates back to 1920 in Grenoble, in the same region as the next edition. The event was then called the “ISDT” for “International 6 Days of Trial”, enduro did not yet exist. 60 years later, in 1980 and for the second time in its history, France hosted the ISDE in the Haute Loire in Brioude, the area where the first enduro competition in the country had been organised 8 years earlier. More recently, the last French edition of the FIM ISDE was organised in 2017 in Brive. 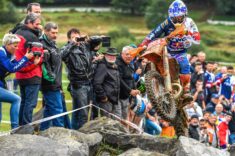 The FIM by entrusting the organisation of the event to the FFM and the Organising Committee is allowing a return to the roots of the event in France. More recently, this same region hosted the final round of the 2021 Borilli FIM Enduro GP World Championship in Langeac (just forty kilometres from Puy en Velay) and 2019 in Ambert (seventy kilometres from Puy en Velay), these two Grand Prixs enjoyed a lively success in particular from the point of view of the crowd, and the enthusiasm they brought to the event.

The Organising Committee (COISDE–2022) is made up of three motorcycle clubs specialising in the discipline, the Moto Club du Puy en Velay, the Moto Club de Saugues and the Moto Club Moto Verte Haute Lozère, which will benefit from the full support of the FFM and the Regional stakeholders.

The COISDE–2022 has been working for more than six months on the creation of the course by being focused on two main points: to propose a course as the riders like them, varied with breath–taking landscapes and a certain technical level specific to the DNA of the ISDE.

The route will be organised around three completely different loops each of around two hundred kilometres, which will take the competitors on a journey to the heart of the region and beyond, with no less than thirteen different special tests and five timed tests per day, 5 service time checks per day, including 2 double ones, so only 3 separate spots in order to limit the logistics for the teams:

Some views of loop two during reconnaissance with the three presidents of the founding motorcycle clubs at the handlebars © COISDE-2022
Always with the aim to reduce costs for all the teams, pro and amateur alike, the FIM wanted to reduce the length of stay by one day by eliminating the day between the last day of checks and the first day of racing. So, the timing of the event will be as follows:

Le Puy en Velay by night – The history of the town goes back to antiquity, founded by the Gallic tribes Vellaves and Avernes (the origin of the name of the Auvergne territory). Today Puy en Velay is a UNESCO World Heritage Site and recognised as the European capital of the Saint Jacques de Compostel pilgrimage © Office du Tourisme Le Puy en Velay

The pre-registrations opening is scheduled for January 2022.