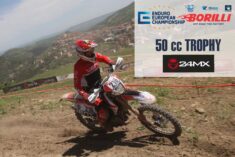 A new trophy, dedicated entirely to the 50 CC, starts within the Enduro European Championship 2022; the FIM Europe, in fact, has created this particular ranking as an incentive for the participation of the youngest riders in the championship, also encouraging the development and use of this displacement often unfairly underestimated. The 24MX 50 CC Trophy, for this year, will take place during the first stage in Pietramontecorvino (Italy) from March 19th to March 20th.

24MX 50 CC Trophy consists of a particular category reserved for all vehicles with a maximum displacement of 50 CC, regularly registered and insured and for all drivers in possession of a regular licence for driving such vehicles and there is not an age limit. The riders that could take part in the competition are those with a FIM Europe Enduro & Rally Promotional (One Event) licence and starting permission issued by FMNs . Registration for the trophy must be made a maximum of 20 days before the event by filling out the appropriate form on the championship official website, https://www.enduroeuropean.com/. The cost of the registration is 120 euros.

The 24MX 50 CC Trophy is at its first edition and will be structured in this way; During the first round of the championship, that will take place in Italy on March 19th-20th, all those who meet the criteria mentioned above and have registered on the championship’s official website, will be able to take part in the trophy. Competitors will be placed in the special category reserved for them and will face the same route as the drivers enrolled in the Enduro European Championship (unless specified differently by the race jury). Three prizes, signed 24MX, have been up for grabs for those who will sign the first three positions of the day; At the end of the Italian Round, the winner of the first edition of the 24MX 50 CC Trophy will be crowned.

The trophy sees as its main sponsor 24MX, the most famous E-commerce in Europe for the sale of spare parts, clothing and accessories useful for carrying out motorcycle activity. The Swedish brand has promoted this initiative that is aimed at encouraging the participation of the youngest in the championship; in fact, this displacement has been designed specifically for the “little ones”, who once obtained their licence, can experience enduro discipline for the first time. Descending from regularity, enduro requires the use of a vehicle according to the law and therefore, being the 50 CC among the first registration displacement, it turns out to be the first choice for approaching the discipline.

The promotion of young people is of fundamental importance to keep enduro alive; for years the Enduro European Championship has been the first approach to international competitions for many young riders and it has always been a good test for those who want to face the FIM Enduro GP World Championship. The introduction of the 24MX 50 CC Trophy is, therefore, perfectly in line with the aims of the continental championship.

To learn more about it, consult the rules on the official website of the championship https://www.enduroeuropean.com/ and run to register yourself!