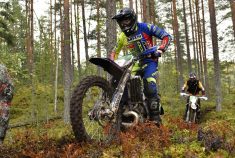 English victory in English weather
The partly heavy rain had made the track and special stages at the finale of the European Enduro Championship in Heinola, Finland, particularly difficult and demanding. On the slippery stones and smooth roots the motorcycles had to set the best times.

At first, 19-year-old Roni Kytönen was able to use his home advantage and took the lead – but always the Englishman Jed Etchells was at the back. After the first lap, he found the right suspension setting on his new Sherco and pushed the Finn in front of him. At the end of the second lap he was able to take the lead with less than a second. But already in the next special stage Kytönen took the lead back again. But then Etchells drove 13 seconds faster than all other riders in the next test and laid the foundation for his first overall victory of the day. “In the rain and mud and right through the woods, I trained a lot in the winter, conditions like these suit me,” the 18-year-old junior rejoiced afterwards.

This allowed Kytönen to take the lead in the championship and further extend his lead over the competition.

In the cubic capacity classes, the first champion was already crowned prematurely:
Patrik Markvart from the Czech Republic can already be celebrated as the champion in the 250 cc four-stroke engine class: The KTM rider had already won all the races this year and is therefore already unbeatable in the lead, although there are still two days to go.

In the women’s event, day winner Hanna Berzelius from Sweden may be able to secure her title on the second of the three driving days: competitor Nieve Holmes from England still suffers from her injured shoulder and, in addition, she jumped down the drive chain twice in the special stage, which is why she lost the shot.